The History of the Oven 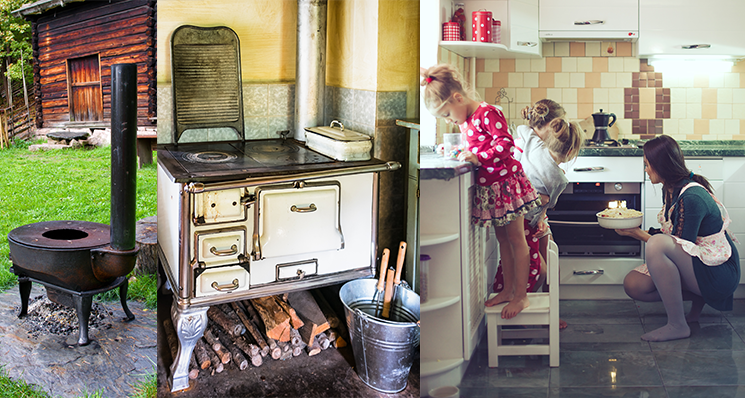 In the beginning, it was likely that across every civilization stone was used to contain the flame that cooked the food. Throughout Africa, the Mediterranean, and the Roman Empire various types of wood fed a fire within a stone enclosure to bake bread and broil meat. A way to contain heat was the primary premise of the oven, as opposed to open-air fires used to boil water and soups. Despite the advancements that have come over the centuries, this basic function of the original oven has been kept.

The Europeans Have Landed

When the first Europeans arrived in modern-day America, the traditional stone stove received a slight upgrade, and colonial housewives used ventilated brick ovens to feed their families. These ovens, of course, lacked the control knobs that would later arrive – courtesy of the Industrial Revolution. Oven users of the time were forced to manually add and remove wood to stoke or cool the flames when necessary. Temperature measurements were about as crude as you can imagine: it was common practice to slip your arm inside the enclosure to see how hot it was for the particular meal you intended to cook.

Development in the 18th and 19th Centuries

As far as the oven was concerned, Count Rumford of England made the most significant contribution to date in the 18th century. His improvement on a cast-iron model allowed variable heat for different foods in different pots – making things easier in the already hectic colonial life. Not too long after, the pace of improvement sped up with Zachaus Winzler's use of gas – instead of merely fire heat – to cook. Later James Sharp designed a contained system as an improvement over Winzler's manual one and the first gas oven was put to market in 1834.

To The Present Day

Finally, almost 60 years later, the electric stove debuted (thanks to engineer Thomas Ahearn). Later on Percy Spencer of Raytheon Corp, took this one step further and created the microwave oven in 1946 which has easily become one of the most important kitchen appliances in the American home.

3 Parts of Your Fridge You Forget to Clean [+1 Bonus]
The Perfect Science of Baking Cookies: Make Kid Scientists in Your Kitchen!